Judge Less, Feel Better
Want Change? Start with Yourself
How to Stop Making Excuses
How to Deal with Haters
How to Have Courage 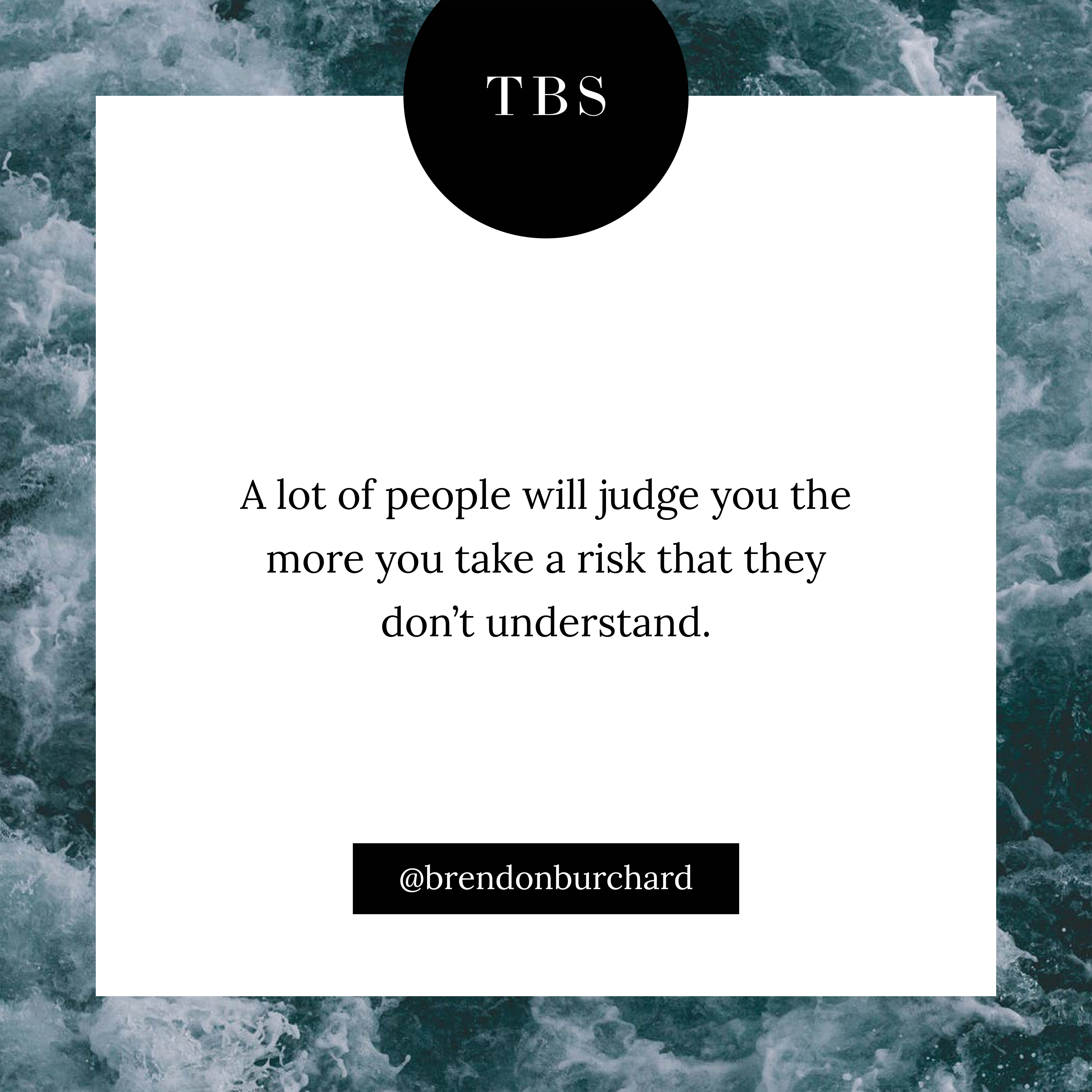 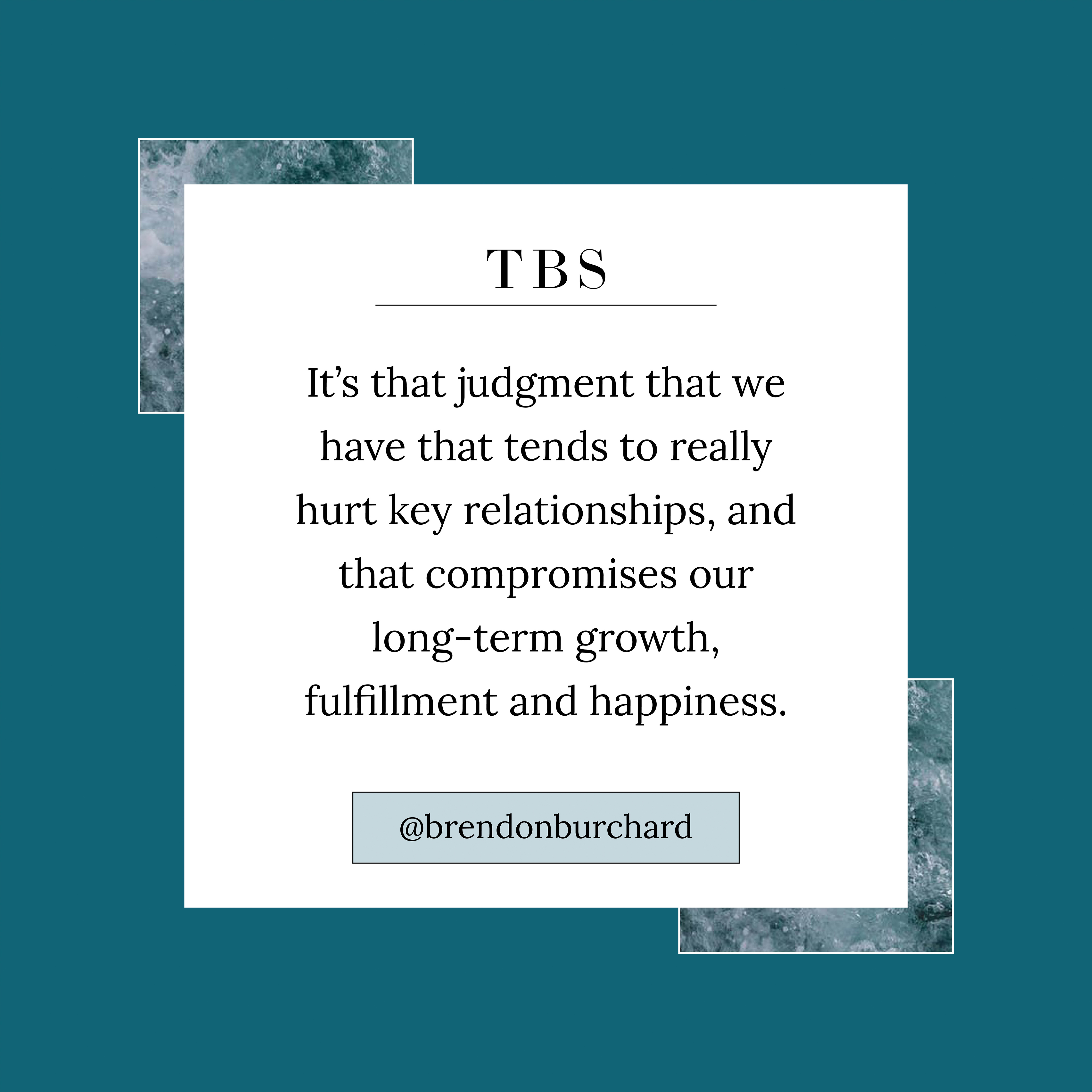 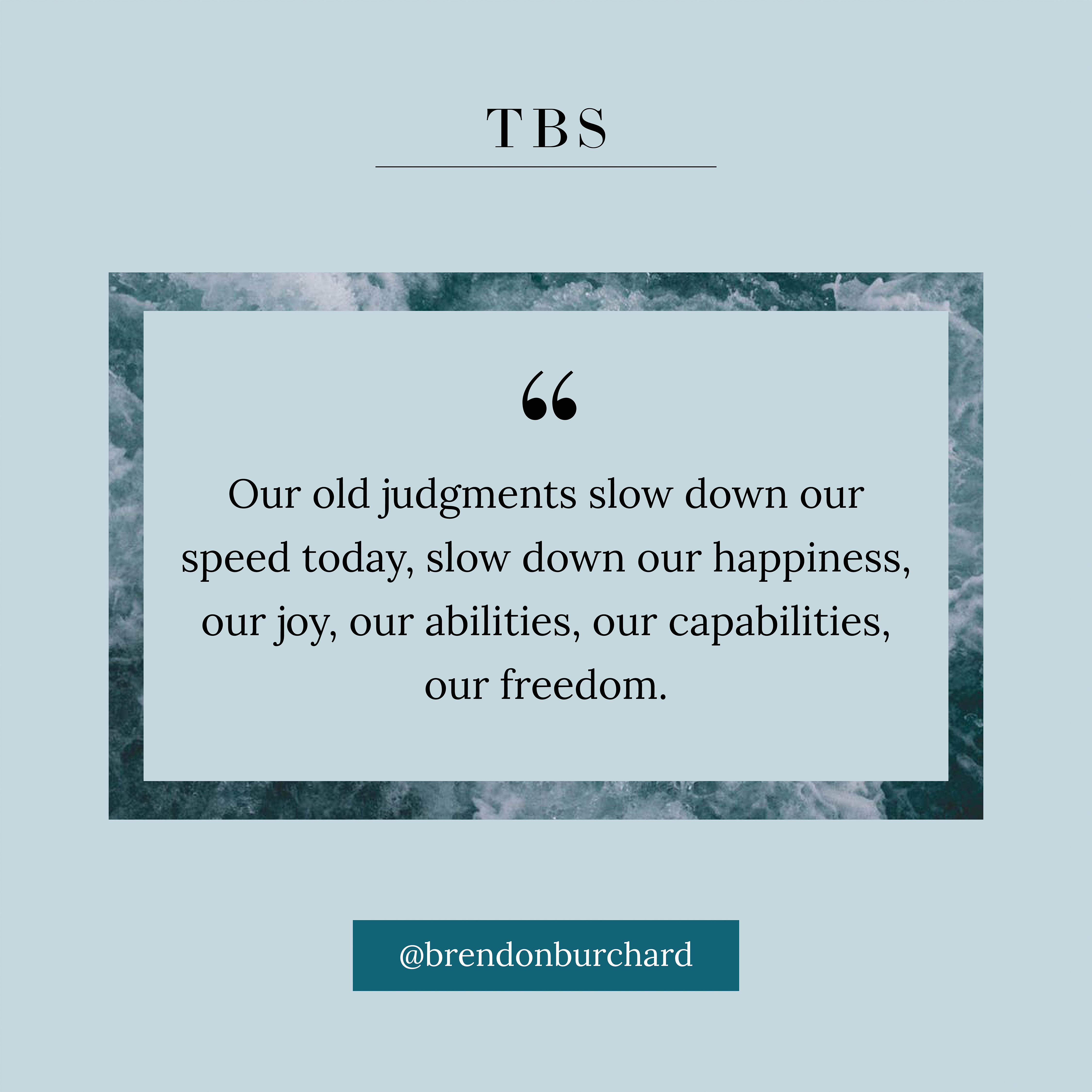 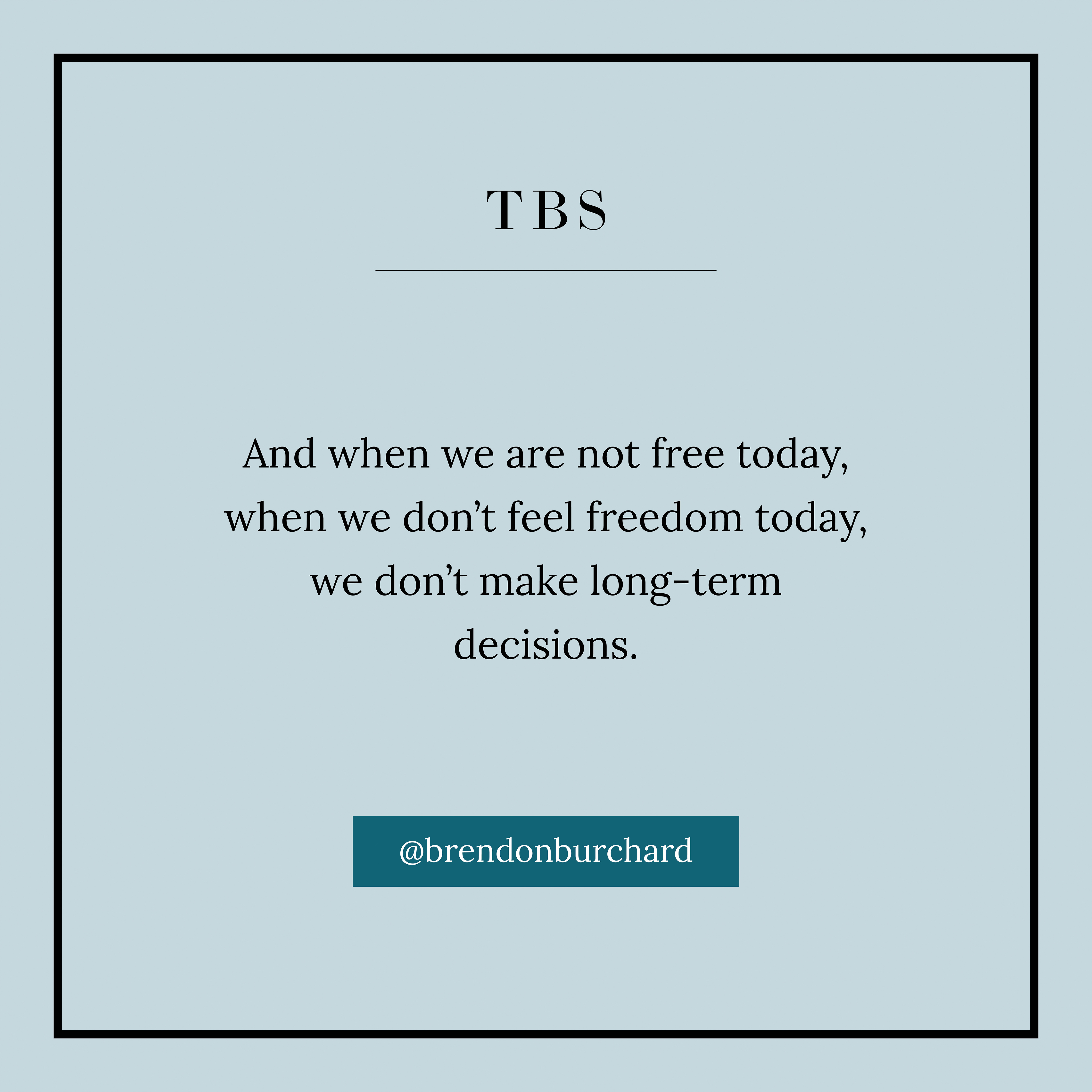 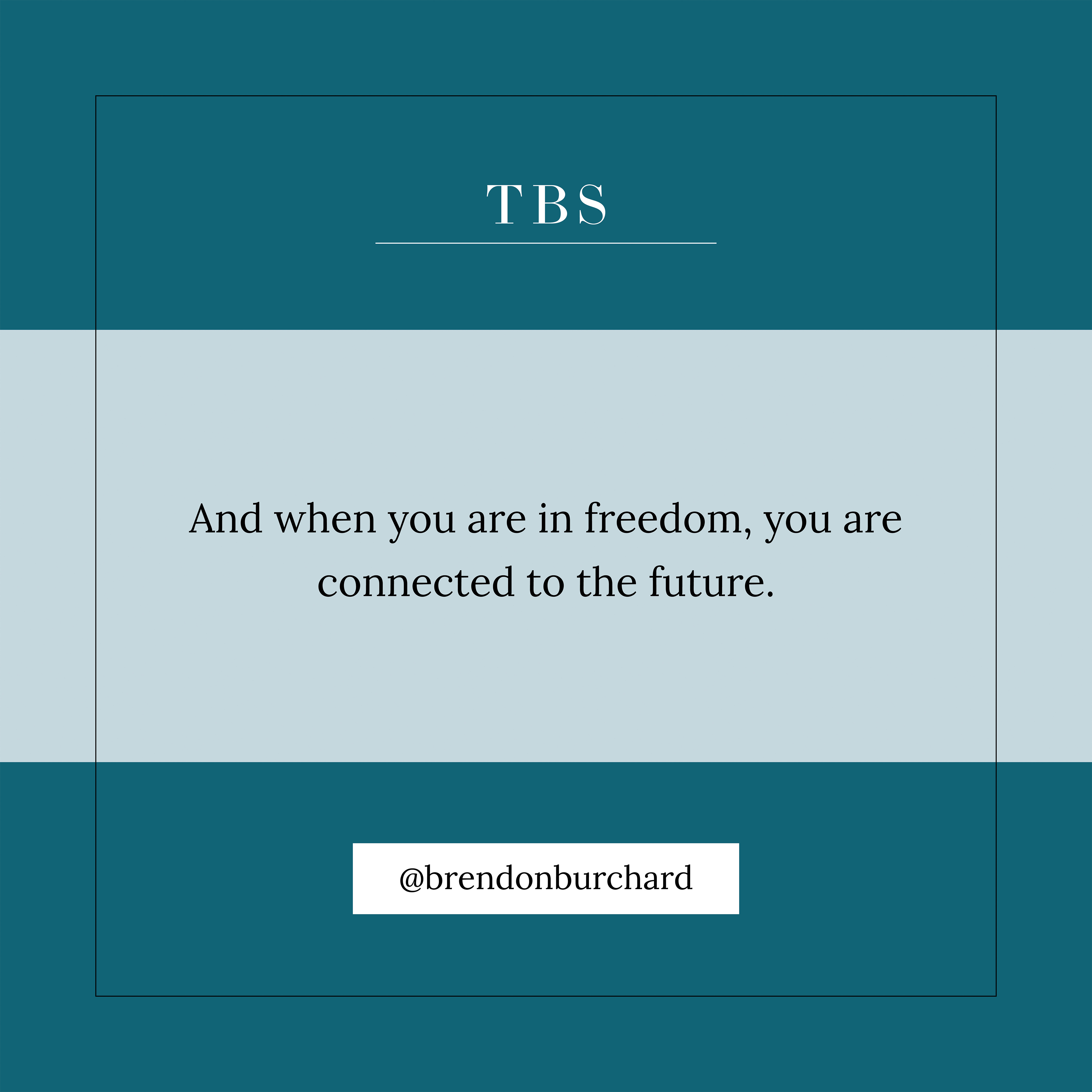 This one is going to hit a nerve for many of you. If I haven’t hit any nerves yet, this one will probably do it.

In the short-term, as humans we tend to value judgement. The biggest issue with judgement is this: You make judgements all the time and you can’t help it. Our automatic sort of system, one level of thinking is just like, immediate bias, immediate judgement, immediate framing, immediate good/bad, right? Now, later. Healthy, not healthy. Safe, unsafe. We have these immediate judgements that drive our life. Move towards, move away from. Approach, avoid. It’s literally built within us that we make immediate, spontaneous judgements. That was to protect us, that was part of that evolutionary impulse to make sure we survive.

The issue is we have a bunch of judgemental brats running around the world causing havoc, spreading hate, spreading darkness because it’s also really fun to demonstrate and portray and to publicize our judgements. How fun is it to go on and comment, “Well, that’s a stupid video. Hate your shirt. You suck. You’re fat. You don’t know anything. Who do you think you are?” And we as a society, we have now become little thumb warriors passing our judgement in comment sections all the time. And what’s happened is these two things have come together to create an incredibly negative society and a negative, unhealthy life. I know that’s not in this community, but I know in this community, how many of you guys know this to be true, that a lot of people judge you the more you go for it?

A lot of people will judge you the more you take a risk that they don’t understand.

The more people judge you when you shun this and you move towards that. It’s difficult to be a front runner, it’s hard to be the high performer, it’s hard to be the person who raised their hand and says, “I want more, I’m ready to go for it, I’d like to help more”, because people judge that. They think, “Well, who do you think you are?”. And if enough people tell you who do you think you are, guess what? You do. You shut down and you start making short-term goals.

Many of you grew up in incredibly critical and negative environments. And after coaching people on this for many years, I have learned and seen that if there was a pattern in your youth where it was always critical, always judgemental and negative over and over and over and over again, you tend to develop an overvaluative system for stability and self-protection. And so, what you end up doing because you think, “Oh well, something’s wrong with me”, you don’t seek to build a team. Every time you want to do something and you get judged, you stop pursuing things that are fulfilling because you’re hurt all the time. You start taking those simple pleasures to make yourself better and you compromise your health. And I’m not saying this from a person knowing you specifically, I’m speaking to this, obviously, in a group coaching environment. But I have worked with so many people who have incredibly unhealthy habits today because they never realized that they developed short-term valuation strategies to protect themselves from judgement that hit them in their youth. So today, they keep making short-term decisions for themselves and they don’t know why. They say things like, “ I don’t know why, Brendon, I just can’t seem to plan for the long-term!” It’s because you were hurt so much when you were younger, you started being protective in the short-term and stopped thinking long-term. You stopped thinking that you were even worth it.

So why even pursue things that would make you feel really happy? You don’t deserve happiness because this person told you you’re crap. This stuff is real, and it happens for people over and over and over.

I grew up in a town where, for me, even just at its physical safety level, I grew up in a very, very anger fueled, aggressive town. There was a time in my dad’s life when he was very strong because he was a military guy. He was a Marine, and so very short discipline, and it just makes you on your edge. And guess what, when you’re on your edge to protect yourself all the time from your neighbors, the community, the people around you, when you’re on your edge all the time, what are you doing? You’re short-term. And some people don’t know, they’ve never taken the blinders off. You’re safe now, but you’re still thinking short-term when you’re trying to protect yourself. Make sense? A lot of people have that. They have safety now, they really do. They have great spouses, great partners, good paycheck, life is good, but they’re still completely unhappy because everything is short-term protection, and they don’t realize those blinders for short-term were put on when they were younger.

And so, what I have to do is bring that to your awareness to say, if you’ve always been a short-term thinker, does that stem from you protecting yourself? And that might be a good place to explore, a good place to do some personal development, a good place for you to talk with your coach or with your therapist about to go like, “Huh, I’ve always been a short-term thinker. Why, why is that?” And I’ve just noticed that correlation personally working with really top performers who started making bad decisions in the short-term. I worked with an Olympian who everyone knew was going to win the Olympics four years later, and instead, they completely self-destructed for three years, and they couldn’t figure it out. Why couldn’t they have a four year view? All they had to do was look for four years out and have a gold medal. Instead, they destroyed themselves because all they’ve ever been doing was protecting themselves, and when all you do is protecting yourselves, you can’t see four years from now. You’re trying to get through this week, man. This day, this hour. Makes sense? Something to explore about your unconscious.

I think the other element about it is we have gotten so practiced at passing judgement to other people that we have hurt relationships. I think that’s something that we’re just, we’ve lost patience as a society because everything’s so quick-serve that our relationships have become quickly judged.

And if you keep overly judging things in the short-term, sometimes to protect yourself or sometimes because you have a bias, but it’s that judgement that we have that tends to really hurt key relationships, and that compromises our long-term growth, fulfillment and happiness.

And so, all these things obviously have a dynamic that they play together, and I also have to say that sometimes it’s easy to judge somebody on the short-term, but what we do is we hold judgement for the long-term. And when judgement is held for the long-term, it always becomes like that whole relationship, that whole person, that whole thinking becomes spoiled, like fruit left out for too long. That’s what judgement is.

Judgement is like that like that piece of fruit that’s been left out so long that now it becomes poisonous. You see what I’m saying? And some of you are holding onto a judgement about somebody that happened three years ago. Some people, 30 years ago. You’re still upset about that. That still causes you to go into impulse control problems? Let me give you an example? Sometimes, people have judgement, something happened to them 10 years ago, and what happened to them 10 years ago is still controlling the day today, even though that person isn’t in their life, that situation is 10 years old, but they held onto the judgement about themselves and about that situation being unfair or unsafe. And so, because I feel this way at that time, it’s unfair and unsafe, then guess what, I’m angry or I’m scared or I’m unworthy, and the judgement of self perpetuated from a situation 10 years ago. And this is why some people never hit high performance.

I know that sounds so weird to bring in because it feels like we’re in a therapeutic conversation. I’m not a therapist. I’ve studied psychology for 20 years in my life. I’ve trained therapists in coaching situations, but I am not a therapist.

Some people are still caged from something that happened 10 years ago because they have not yet gotten the support they might need to overcome that judgement. That judgement against that person, that situation and themselves.

Beause it’s always three levels deep, isn’t it? It’s always three things. We judge a situation, we judge the people in it, and we judge ourselves within it. And what people don’t realize is often when all three of those judgements are negative somewhere in the past— “I’m bad, they’re bad, that situation was bad,” and we don’t have a long-term mental strategy to overcome that, then we go into short-term thinking again. And now we struggle to make good, healthy decisions for ourselves.

And so, what’s the opposite of that? The opposite is what you guys probably could’ve guessed. It’s forgiveness.

And when we are not free today, when we don’t feel freedom today, we don’t make long-term decisions.

It’s just the way it is. The more caged somebody is, naturally, in any situation or conversation, the more protectionist and short-term thinking they get. The more free you are, the more you’re like—have you ever gone on vacation? Back at home, you were tied to the computer 24/7, just constantly. You’re at the computer 24/7, you go on vacation, there’s no computer for a day, and all of a sudden you’re like, oh! And all of a sudden, your mind starts flooding with thoughts about the next decade. You haven’t thought about next month or the next decade for weeks or years, but you’re on vacation, and all of a sudden, you’re looking for a piece of paper to write that big idea or you set new goals or you talk with your spouse about the future again. Why? You got a moment for your brain to breathe in freedom.