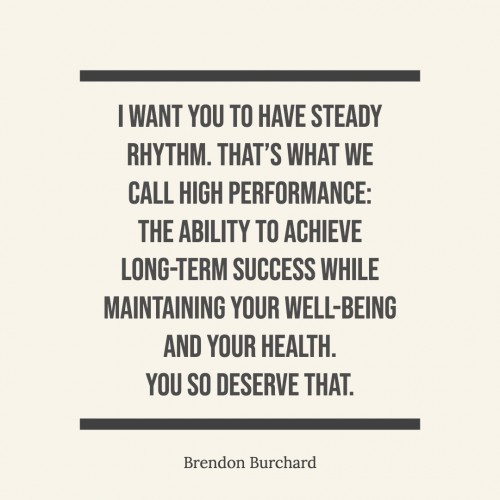 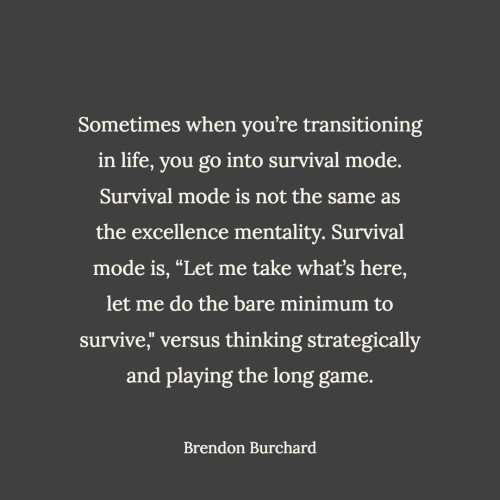 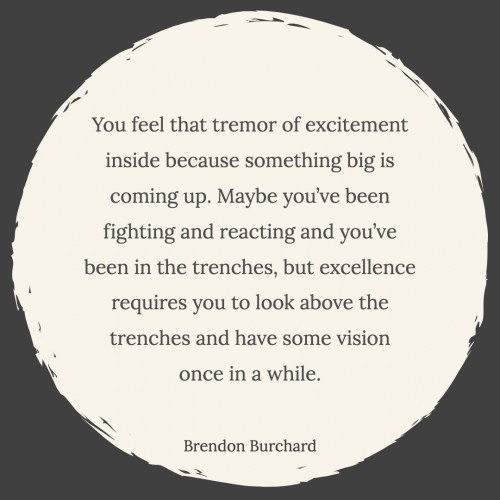 [The following is the full transcript of this episode of The Brendon Show. Please note that this episode, like all TBS episodes, features Brendon speaking extemporaneously–he is unscripted and unedited. Filmed in one take, The Brendon Show has become one of the most viewed unscripted, direct-to-camera self-help series in the history of Youtube. It has also been the #1 Podcast in all of iTunes and is regularly in the top podcasts in Self-Help and Health categories around the globe. Subscribe to the free motivational podcast on iTunes or Stitcher.)

How do you level up to feel your best? That, to me, is the quintessential metaphor and demand of ourselves to be extraordinary. If you just go through the motions or do what you’re comfortable with, then excellence will demand a little bit of edge from you.

Excellence demands that you push beyond what’s easy, what’s your natural strength, or what you could just do and get away with, and says, “No. What’s that next level for me?”

I wanted to start with that expectation right off the bat.

You need to have that thinking coming in today. You need to be doing the self-analysis because today, as usual, I’ll challenge you. I’ll cajole you, I’ll tease you, I’ll share my own struggles and challenges along the way because it is not easy leading a worldwide community of high performers.

The other day, I was in an airport, and somebody came up to me and said, “Brendon, you look rough!” I said, “Well, I just finished a four-day seminar.”

He says, “You do those all the time.”

People ask: How am I doing this?

I know many of you are perfectionists and that’s not the conversation today.

Excellence is not the same as perfectionism.

I think anyone who really believes themselves to be a perfectionist tends to be really hurting themselves. They are hurting themselves because the mentality that things have to be perfect—while they take a lot of pride in them—actually ends up compromising their health and their relationships.

I’d rather you say you’re a person of excellence than a perfectionist.

Usually, those who are perfectionists have to ultimately compromise.

They’re operating based on the belief that if it’s not perfect, there is rejection, ruin, and regret, whereas excellence is getting stuff done.

There’s a momentum to excellence that is lacking in perfectionists.

A perfectionist might get something done, but they get one thing done each year, and a person of excellence gets six things done, and has equal progress and equal breakthroughs.

I know some of you are thinking you’re a perfectionist.

It is really important that you listen and tune in today because we might be able to add some value that helps you reimagine who you are and what you are capable of.

Listen, if you don’t have the momentum in your life you want right now, your mindset and your behaviors might be preventing you from delivering your best. If you don’t sense a real momentum, then there’s something going on.

You feel that tremor of excitement inside because something big is coming up.

Bust out your journals, get ready for your notes, and get ready to ask yourself some serious questions.

The first value of excellence is this: You have to play the long game.

A lot of people live mediocre versus excellent lives because they weren’t playing the long game. They weren’t thinking how to scale out three years from now.

You and I both know, you are here because you’re in a transition, and something new is coming along, and you’re trying something new.

Survival mode is not the same as the excellence mentality. Survival mode is, “Let me take what’s here, let me do the bare minimum to survive,” versus thinking strategically and playing the long game.

Most people, when they’ve become burnt out, didn’t experience it immediately. It happened bit by bit by bit.

I talked with my coaches this morning about that. When someone’s in burnout, don’t think it was one big project that tipped them over the edge. It was little decisions, bit by bit, where they gave away their time and freedom.

The problem is that if you’re a high performer, you can survive on burnout for a long time. A lot of burnouts are operating at a high level of efficiency. They’re burned out, but they can go six, seven months like that. They don’t take the time to step back and recharge throughout the day.

Recharging doesn’t just happen once in a while on a vacation. I mean throughout the day, each day.

Always looking out a few months ahead is part of excellence. Otherwise, you can deliver excellence once, and then you crash and burn.

That’s how you can spot a person of excellence: Did they have this rhythm and scale—even if there were some lower points—or did they launch something and then crash?

For a lot of people, I can look over their last 10 years and realize they weren’t defined by momentum or excellence. Their last years were defined by survival. It was defined by luck, crashes and burns.

Trust me: there’s so many nights where I say to myself ‘If I just stay awake for four more hours, I can get these projects done. ‘ And then, I’m a complete idiot 72 hours later.

Trust me, there are so many nights where I know if I stay awake for another four hours, I can get my projects done. But then I’m a complete idiot for 72 hours later.

I know it will catch up with me.

Those who play the long game don’t compromise in the short game, because they know it will catch up to them later.

That catch up is a devil. It is a bear, it is a beast, and it knocks you down.

You realize you can compromise three hours here, but because you compromised, you’re knocked off your feet for three days over here.

If you’d taken the three hours to recharge, you wouldn’t be worthless for three days in the middle of the week. Sometimes you can compromise and end up being a complete mess a few days later. I want you to have steady rhythm. That’s what we call high performance: the ability to achieve long-term success while maintaining your well-being and your health. You so deserve that, my friends.