How to Track Your Personal Growth
Advice to Human Resource and Learning and Development Leaders
How to Master Motivation
Want Change?Start with Yourself
The Power of Identity 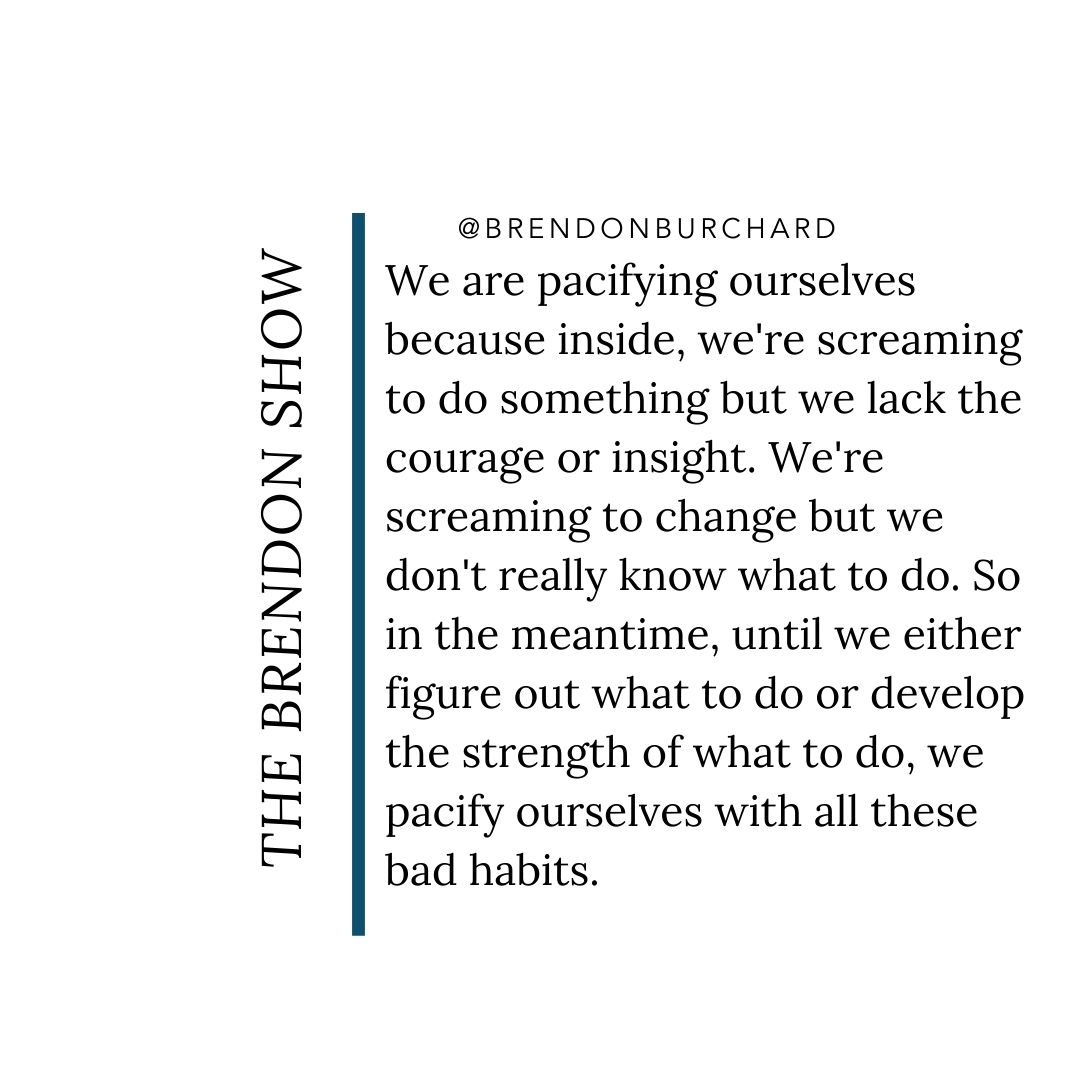 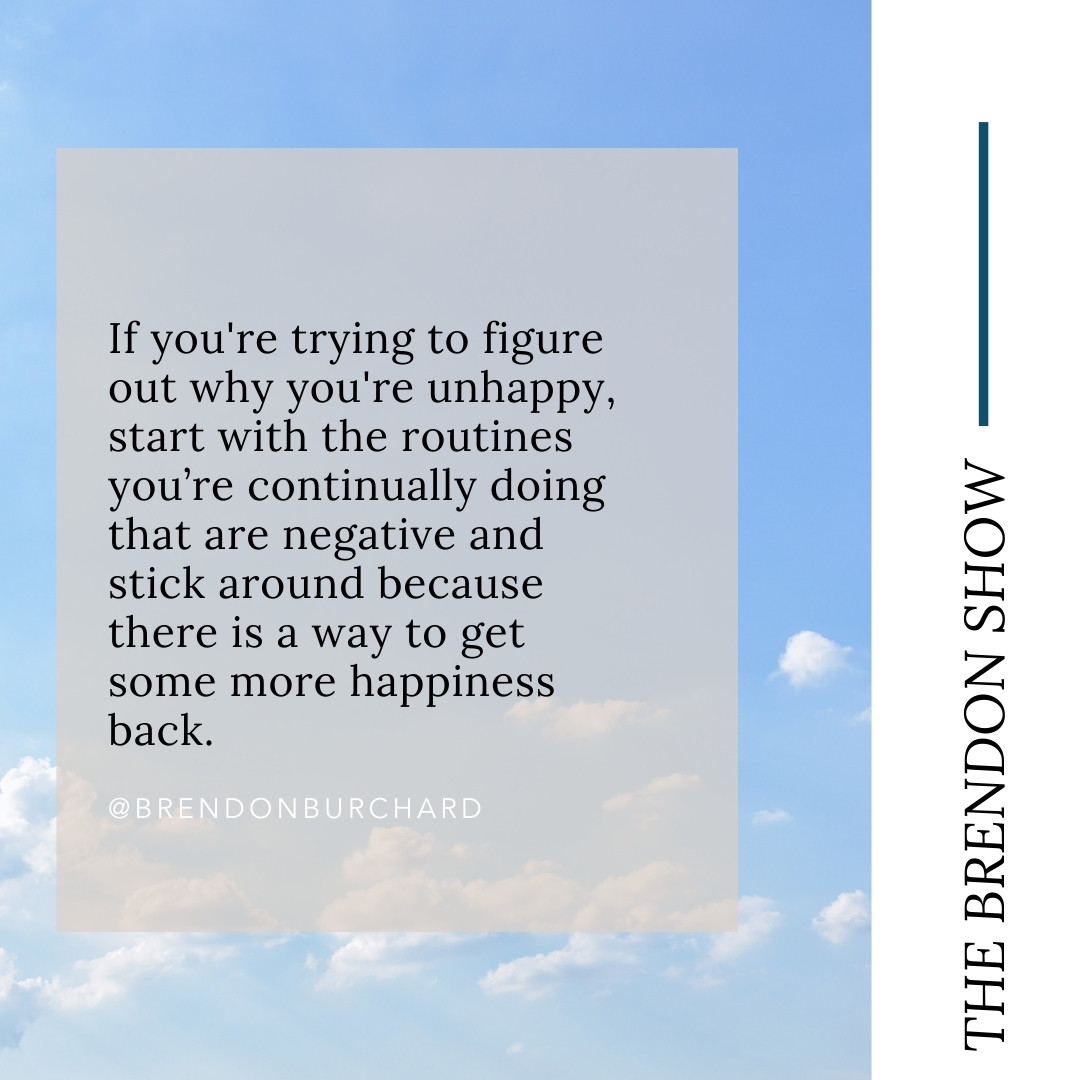 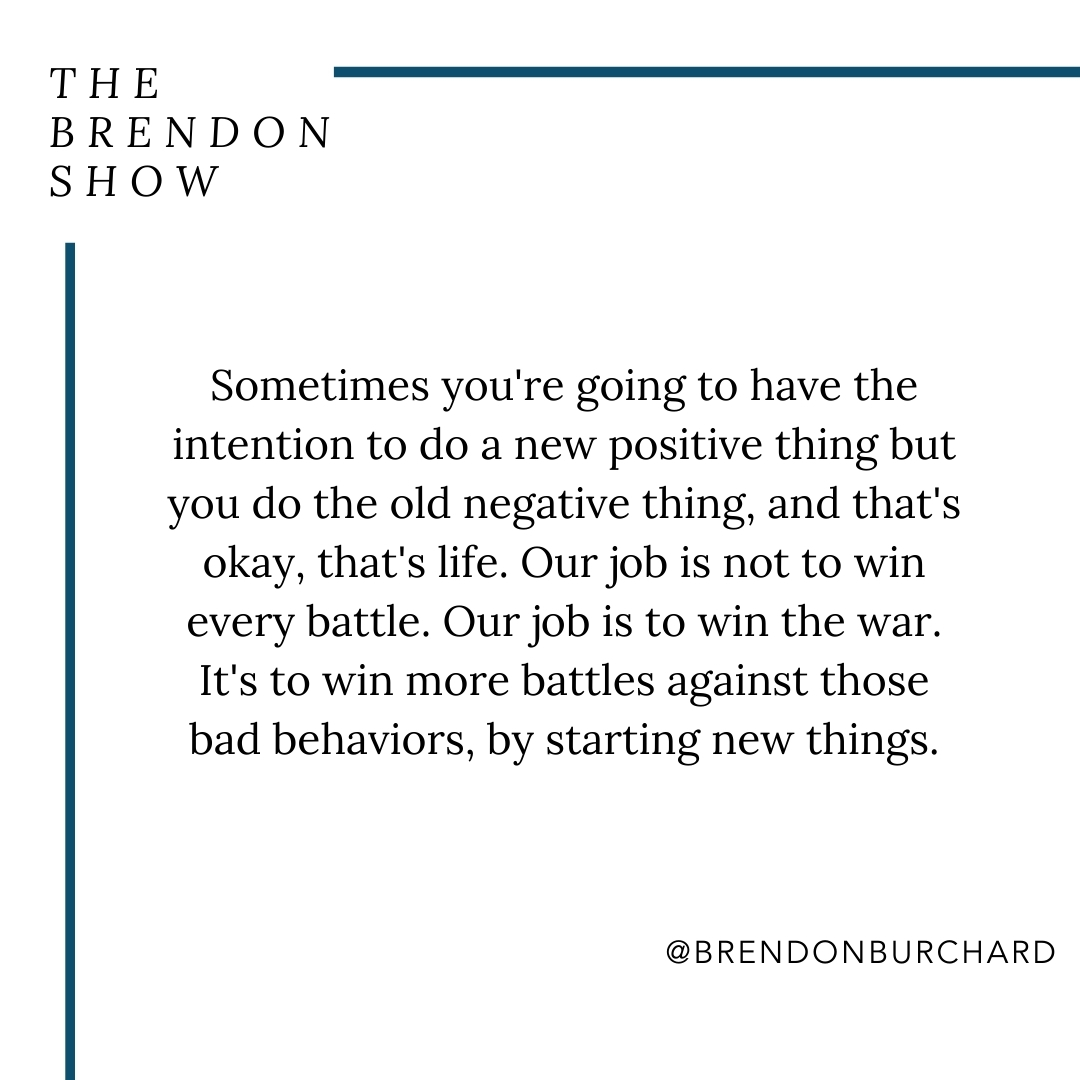 So we’ve got a lot to cover here but I’m going to be very direct and straightforward because I’m going to assume you’re going to do the work of identifying your bad habits. My attempt today is to boil them all down into four categories. So I love just to start by brainstorming any bad habits you have and let’s see if we can pinpoint where they are and why they’re happening.

A bad habit, by definition, is something that’s negative and enduring.

You keep doing it automatically and you’re not even thinking about it. That’s a habit. It’s a response. It’s easy. You just fall right into that thing. So we’ve got to interrupt that bad habit, put something more positive and something more enduring in its place. I’m sure by now you know how habits are formed, right? Something happens, we react to it with a routine and we feel like we’re paid off by it. There’s a payout. There’s a benefit and after a period of time, we just do something over and over and over and over again and it becomes easy or natural: a habit.

1. Our Desire to Protect Ourselves

There’s always a payoff to every bad habit and one of them is that payoff of protection. I don’t have to put myself out there, that’s the payoff. I don’t have to get hurt, that’s the payoff. So we create all these habits, whether it’s a habit of perfectionism, where we never actually release anything in the world so we don’t have to be judged. So we think, “How can I protect myself?”, and these bad habits ensue like not completing the work and realize it’s because they might judge me. But there’s a specific thing that’s happening here. We’re looking to protect ourselves. So are there any habits in your life that you’ve developed that’s a bad habit to protect yourself? Let me give you an example.

One bad habit a lot of people have is they don’t speak up for themselves. It’s just automatic. They have an idea in a meeting. They don’t say anything. Someone says something wrong or abusive or mean or negative, they don’t say anything because it’s easier. That habit of not speaking up for ourselves, feels like it’s protecting us. But we call it a bad habit because over time it steals away the joy and charge of life. Is that a category you have going on? Are there any bad habits that you identify, like, “I keep running that same routine to protect myself.”

We are pacifying ourselves because inside, we’re screaming to do something but we lack the courage or insight. We’re screaming to change but we don’t really know what to do. So in the meantime, until we either figure out what to do or develop the strength of what to do, we pacify ourselves with all these bad habits.

The third big category of bad habits comes under placating.

That means we have a bad habit of pleasing other people so that we can cause them less stress, less overwhelm, or get less emotional reaction from them. Like a lot of people, they would call themselves—they say, “You know, Brendon, I’m kind of a doormat.” I said, “What do you mean you’re a doormat?” “Well, you know, I don’t want to cause a ruckus and I just let people run over me all the time.” You know, people are always stepping all over you and it’s because they have a bad habit of not fighting for what they really want, not communicating clearly their expectations, not setting standards. Instead, they don’t want to upset their husband. So they don’t say anything. It’s not about protection. It’s about placating him sometimes. It’s about placating the people around you to make them feel good even though it’s coming at the cost of your life. That’s often a big, bad habit isn’t it?

That’s why we get overwhelmed in the first place. It’s because we’re doing everything for everybody else to make everybody else feel happy and charmed and good, at the cost of our own sanity, our own wellbeing, our own health.

And so, if you can at least begin to identify some of these, maybe just me talking with you here, maybe that helped you identify some habits. And you’re like, “Oh, I’m doing that.” So if all we did is help you generate some more understanding or awareness or categorization of your bad habits, we’re starting on the right foot.

I’ve found over and over in my life, a lot of people don’t know what their bad habits are and yet they’re unhappy.

So if you’re trying to figure out why you’re unhappy, start with the routines you’re continually doing that are negative and stick around because there is a way to get some more happiness back.

It’s right there and all we have to do is make sure first we’re aware of them and then once we’re aware of them, we decide we’re going to break them. We’re going to find a payoff that’s above those payoffs and it’s a very simple thing to do. I’m going to ask you to do one thing and it’s so easy. Whatever your bad habit is, all I want you to do is rehearse overcoming that bad habit. Rehearse it, because see what we think is, that one day we’re just going to break our bad habits and it’s going to be instantaneous and easy.

The thing is we have to practice overcoming a bad habit to be able to do it in real life.

So here’s what I mean. What I’d love you to do, if your bad habit is you just pacify yourself with food when you’re uncomfortable or unsure, what I’d love you to do is not do what everyone else says. Get rid of all that food because all that food and you know, if there’s food around you, you’re just going to be fat, right? It’s like, well, it’s not the food. It’s why you’re turning to the food. So let’s not try and solve the—leave the food, and let’s practice not going to the food. Let’s instead rehearse, “Okay, how do I deal with this emotion instead of going to the food? What’s another way I can have the payoff of dealing with the emotion without that thing that’s the bad habit?” The food, as an example. Now what I want you to do is don’t wait until next time you’re angry or hurt or upset to go to the food, instead, stand there looking at the food say, “Okay, when was the last time I was really angry, upset, emotional, unsure, insecure and I went to that bag of potato chips? When was that? Okay, let me remember that. What was that like? Now let me rehearse, not going to the food. What else could I do? What routine or behavior could I do instead of going to the food? Okay, you know what I’m going to do? I’m going to open up my journal right next to that dang bag of chips. I’m going to open up that journal and I’m going to look at the chips. I’m going to open the journal, not the chips. Open journal not chips, open journal not chips, open journal, not chips. And I’m going to write down, “Why am I upset? If my highest self was in this situation right now, what would he or she do?”

Let me ask you that question again. If my highest self was in this situation right now, what would he or she do? And I want you to literally write that out. So what happens with habits is there’s a cue. Something negative happens. Our response or our routine is also negative, but it feels like it’s paying us off and then we feel horrible for ourselves. So that middle thing, here’s what you do. The cue still happens. The cues, my friends, are always going to happen. If stress or drama from another person drives you in a bad habit, I’m going to tell you, there’s always going to be stress and drama from other people. If feeling insecure or unsure always drives that bad habit, guess what, there’s always going to be times in your life, you’re going to feel insecure and unsure.

You’re not going to win every time. You’re just not.

Sometimes you’re going to have the intention to do the new positive thing but you do the old negative thing and I’m here to tell you that’s okay, that’s life. Our job is not to win every battle. Our job is to win the war. It’s to win more battles against those bad behaviors, by putting in new things.

And you know what’s funny, as soon as you put in those new things, guess what they give you? A payoff. When you act as your highest self would in that situation versus going to your protectionist self or your pacifying self or you’re placating self or that part of you that just feels like you got to prove yourself, you go to a higher realm, your brain gets the payoff. Your brain says, “Good job, good job, good job, good job.” And the more good habits you run, the more your brain says, “Good job man, good job man.” And now you have more strength. You have more certainty in yourself. You don’t have to lean like a crutch on those bad behaviors to give you some sort of weak payoff. Instead, your brain goes, “Hey, you know what? Last time we fought this and we won. That felt pretty good.”

And you start to get momentum, establishing new, good, positive habits simply because you said, “Bad cue, what good would my highest self do?” You try that a few times and you start getting momentum to change your life.