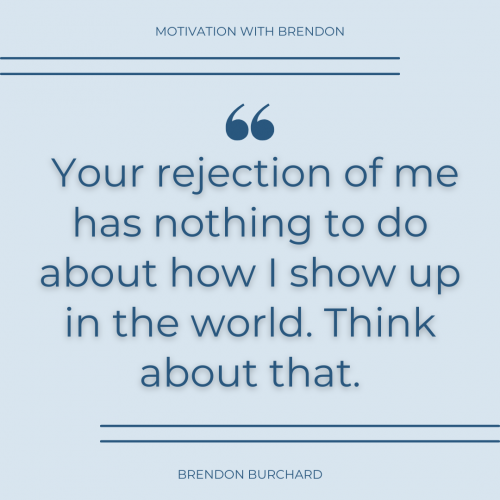 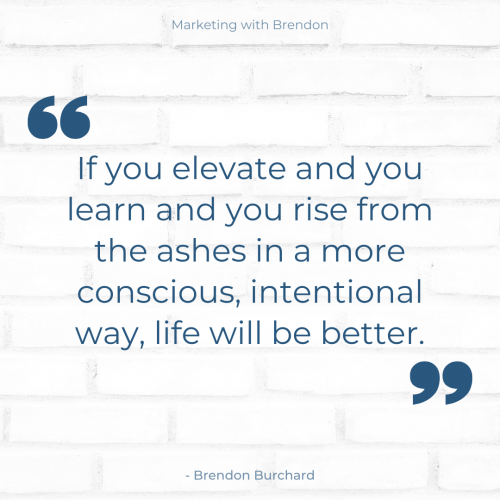 [The following is the full transcript of this episode of Motivation With Brendon Burchard. Please note that this episode, like all episodes, features Brendon speaking extemporaneously–he is unscripted and unedited. Filmed in one take, Motivation With Brendon Burchard has become one of the most viewed unscripted, direct-to-camera self-help series in the history of YouTube. It has also been the #1 Podcast in all of iTunes and is regularly in the top podcasts in the Self-Help and Health categories around the globe. Subscribe to the free motivational podcast on iTunes or Stitcher.)

Most people, they’re not actually experiencing a physical sensation of fear. They are worrying themselves into fear. They got on the merry-go-round of doubt and they spun themselves into a circle that caused their stomach to get upset, their brain upset. And now they’re just worried that things won’t turn out well.

Most people aren’t experiencing fear. They’re experiencing worry. And so once we understand it, worry is a projection of a future outcome that’s negative, right?

It’s contemplating something that might not be good in the future. And that worry can spin into fear or anxiety for people. What I want to talk about, though, is the fear that most of us have when we don’t make a decision we know we should. And most often, most often comes down to four things. I always teach this if you ever heard me teach it – there are only four things we actually fear once we remove or move on from the conversation of, like, real fear, like physical safety fear. Once we get beyond that, most fears are driven by four things.

Number one: we don’t make the decision because we believe it will cause ruin.

I know I believe this thing, but it will ruin my reputation. It will ruin my relationship with the kids. It will ruin my finances. It will ruin my future. In other words, we get stuck in a loop of what’s called catastrophic thinking. We just imagine taking this action to change will lead to catastrophe. That’s called ruin, right? I think by changing, catastrophe will strike. And we blow up this imagined future where we’re totally ruined, our reputation, our relationships, our finances decimated, ruined forever. Unrecoverable. And this is what your brain does. It gets in that worry loop, it spins it so many times, now, it’s a catastrophe. Right? We say, oh, my God, they’re all going to hate me and they’re going to shame me and I’ll have no friends ever. Which really began as a thought, like, what if I don’t make friends there, you know? The first thought was worry. What if she doesn’t like me? And then it becomes, Oh, my God, they’re all going to hate me. They’re all going to talk about me. I’m never gonna have any friends. I going to be alone. Right? The spinning of the worry into this catastrophic, very nonsensical thinking. I always tell people you have to learn to hear catastrophic thinking in your brain like a cartoon character, right? Like a cartoon character. Like I just think of, like, you know, when I think of, like, catastrophic thinking, I just know it’s almost cartoony. It’s so obnoxious. Really, I’m going to be ruined forever? You’re not going to be ruined forever if you end your marriage or your career or your job, because you’ll do the personal growth work to level up to become an even better person. You’ll define even more of what’s right for yourself. You’ll make better decisions. You’ll stay more committed. In your next stage, you’ll learn from the first stage if you’re conscious. If you go in your same, same: trouble.

But if you elevate and you learn and you rise from the ashes in a more conscious, intentional way, life will be better. You’ll be okay.

Okay, I said. There are four kinds of fear. Number one is ruin. Spend a lot of time on that.

Number two is regret. It’s the part of our brain that compares and contrasts too much.

Of course, this often justifies bad behavior too. So, how funny is that about human psychology, right? It’s like, Oh, I don’t regret stealing this candy bar from this store. Well, it’s too bad your character didn’t say don’t steal a candy bar.

I wish more people would think about regret, but not in a fear-driven way. In a character-driven way. In a way that says, I’m going to be a person who is responsible with high values and integrity, and character as I move through this.

The third thing that we worry about or we have fears about, and this is important to recognize, is that rejection is a fear. Rejection. They won’t like me. She won’t like me. It’s not just catastrophic. It’s that sense that we won’t be in a place where we are heard, seen, honored, respected, and cared for. You know, the idea that you’re going to be ostracized or lonely if you make this decision has killed a million dreams, and has prevented so many people from moving on to a bad relationship. A lot of people stay in the wrong place because they fear rejection. I’m like, you’re already being rejected. You’re scared you’re going to be rejected? It’s already happened. That’s why they’re treating you that way. If someone is treating you badly, they’ve already rejected you. Don’t fear it’s going to happen. It’s already happened. So, now make the move, right? The worst case has already happened. You’re like, Oh, I’m so scared of the rejection. I’m like, it already happened. And here’s the news for everybody else if that’s too deep. You’re already being rejected 100 times a day. People go by your Instagram, they don’t like, comment, or deal with it. They scroll right on by you, right? You pitch the idea at work. They don’t hear it. They don’t listen to it. Why are we all so scared of rejection? Your rejection of me has nothing to do about how I show up in the world. Think about that. Your rejection of me has nothing to do with how I show up in the world. And you know, I’m in this difficult spot of, like, right now, you know, some point millions of people will see this. Lots of people will hate me by point number two. Right? I’ve been on – I just spoke to 25,000 people, live in a two-week tour like in-person at conferences, again on stage at big events and arenas and conference centers. And inevitably, I’ll get a standing ovation at every event. But I know there are some people who don’t like me and are standing up like glad he’s done, hahaha, it happens!

Their rejection does not guide your behavior.

I’m going to be driven by the ambition of who I want to become. When you switch into that mode, now courage shows up. When you switch in that mode, now intention and character show up. I don’t want you to worry about the rejection. You don’t halt making good decisions in your life because of what other people are going to think. Because here’s the good news: most people aren’t even thinking, let alone thinking about you. That’s true. For most people, they’re automatic – they’re not thinking at all. There’s no strategy. Just thought comes in, the thought goes out, thought comes in, thought goes out. And they’re thinking about themselves, not about you. So, it’s like once you realize no one’s really that concerned about you or your life in terms of what you’re doing. Now, you get to go: What do I want to do? Let me stop worrying about them. What’s important to me? What do I care about? And when you step into that, there’s a whole different level of life.

When we exert our real power, guess what? There’s cause and effect there. You exert power in the world, and things change.

And you worry, can I handle it? And what I love to tell people is like, don’t worry if you can handle it. They’re like, what? I’m like, I never worry if I can handle it because my dominant mode in my brain isn’t I have to go handle it perfectly. My dominant mode, thank God, is the growth mindset that says I’m going to go learn. I trust in learning and I’m not even a good learner for those who don’t know me that well, it takes me a few times. I’m from Montana. You got to smack me in the head a few times, I go, okay, oh, I go, okay, I got that, right? Ask my wife. It takes a few reps over here for me to kind of get it. That it’s like, but I just trust. I just trust. I’ll learn. I’ll figure it out. It’ll be okay. And if I can’t figure it out, I’ll find someone who can figure it out, who can mentor me, who can teach me. The fear of responsibility isn’t even in my bones. I’m like, I can kind of handle anything. Maybe I don’t get it right right away. But over a period of time with enough time, energy, trust, training, mentorship, discipline, and good habits, I’ll figure it out or I’ll find somebody who can. That trust has allowed me to stop certain things in my life that even seemed right. One stage in my career is an example. Elevating to another stage of my career was a scary thing. I could go, Oh, that’s going to ruin my reputation if this doesn’t go well, all my old audience might not like it if I try this new thing. Oh, you know, if I do this, these people might reject me or Oh my gosh, this is going to be harder, I might not be able to handle it. None of that happened because I was aware that that is what we all go through. Your worry and that fear of regret or rejection or ruin or responsibility, it’s just a mind game, isn’t it? It’s just thoughts. It is just how you are determined to perceive it. And that’s the beauty of all this because then once you can get over that, you come right back over here and say, okay, where am I coming from? Is this going to be a strategic, good decision in my life, or am I going to operate on fear and discouragement?