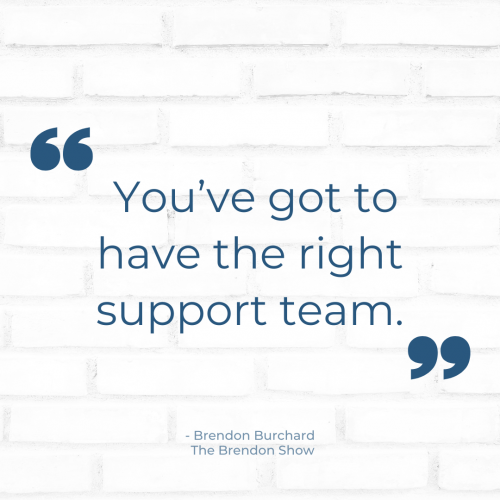 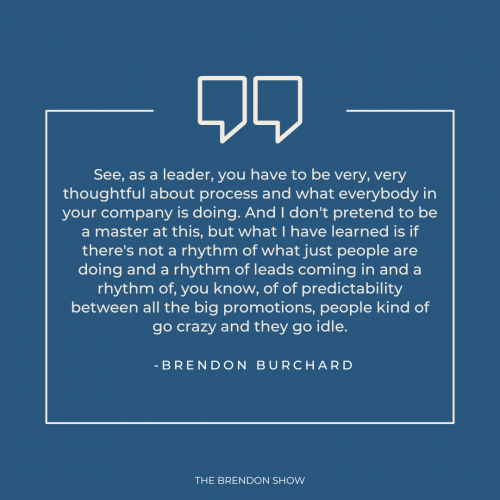 [The following is the full transcript of this episode of Motivation With Brendon Burchard. Please note that this episode, like all episodes, features Brendon speaking extemporaneously–he is unscripted and unedited. Filmed in one take, Motivation With Brendon Burchard has become one of the most viewed unscripted, direct-to-camera self-help series in the history of YouTube. It has also been the #1 Podcast in all of iTunes and is regularly in the top podcasts in the Self-Help and Health categories around the globe. Subscribe to the free motivational podcast on iTunes or Stitcher.)

I thought I’d spend some today talking about what I’m hearing out on the road and maybe give me a little framework because I feel like I had to give this framework to like five or six people on the road in our industry who are struggling and they’re struggling with burnout. First and foremost, they’re struggling with having a business like this and they’re frustrated with it. And even people who are having big wins, they’re kind of upset about the episodic nature of their business. And right now what you don’t want is an episodic business, right? When you’re going into a difficult economic time where it’s not, you know, the boom years, the last 15 years, you want to make sure that you’ve got something pretty steady going, right? And so if you’re just launch mode, you know, it’s like launch, crash, launch, crash, launch, crash, launch, crash. That’s a pretty good recipe for ill mental health. You know that is not something you want coming into this next, you know, the season in the economy. And so I’ll share a simple framework. I don’t know if I’ve ever taught you guys this before. I call it the four Ps. It’s not the four pricing P’s that you learn in your business. One-on-one classes, it’s a little bit different.

Once you have the plan, well, now you have the process for manifesting it. The second process in our world. Do you hear me? Relevant. Bring it up tons and tons of times as rhythm. Having that rhythm. And I know you guys hear that all the time, but let me give you a tangible example here. What happened to my friend? Because their lunch was up, down, up, down, up, down with launch, the craziest thing was happening. Their team was miserable because they would burn themselves so hard to launch. Then they’d crash after launch, try to catch up, and serve everybody. But then listen to this. There was always a 2 to 3 or four-month lull period between the big launches. And the thing is, no one had a rhythm between those things. So what ends up happening is, you know, they’ve staffed up, but then between the launches, everyone’s kind of looking around like, what do we do here? And so what do they do? Replay on the Internet? What do they do? They go out for three-hour lunches. What do they do? They start spending plenty of time looking at other jobs, and other cities.

See, as a leader, you have to be very, very thoughtful about the process and what everybody in your company is doing. And I don’t pretend to be a master at this, but what I have learned is if there’s not a rhythm of what just people are doing and a rhythm of leads coming in and a rhythm of, you know, of predictability between all the big promotions, people kind of go crazy and they go idle.

It doesn’t mean you can always maintain the volume for the perfect number of your team, right? There’s plenty of times in my career or plenty of times between our launches or something, our team’s idle, you know, factor goes up or down. That’s normal. But if it goes to zero, the people hate it. You got too many people on your team who are idle between things and they start talking smack. There’s no plan here. There’s no process. What are we even doing here? Why am I even spending my time here? Why am I? They start saying, why am I wasting my time? Five people on this person’s team told me that same phrase just feels like we’re wasting time. Why am I wasting my time here? And when anyone ever says that it has nothing to do, usually with the purpose because they took the job, the purpose was there. They got detached from it because there was no manifestation of the purpose through the plan in the process. Now, some of you as solo producers, you got a plan, but what is your process? When do you work? What do you do when you work? I was with Michael Phelps two nights ago. He’s the all-time winningest Olympian and really great guy. And he was speaking at an event and we were both there and they brought him in. They kind of interviewed him. So I did a big keynote, then he did an interview. Then he and I did a like private Q&A with their VIPs and it was awesome to hear somebody of that caliber talk about the process over and over and over. I mean, he must have said the word 2000 times between his interview and then our VIP. And, you know, I’m sitting next to him and I start hearing him as he’s saying process how important that word was for him. And, you know, it was like there’s plenty of days he didn’t want to swim, play days. He told his coach, I hate this when I’m even here. He talked about a time in his career where for six months he was just trying to beat this one number in the pool for six months. But he swims every day at this point in his swimming every single day. And for six months, all he’s trying to do is beat this one number that he has beaten several times before. So it’s not like he’s trying to do a personal record. He’s actually just trying to get back to a personal record and beat it even just by one 100, even just one 100, he’d be happy to beat it. And he’s talking about how his tone is his coach. I just why am I even here. This is stupid. We’re not doing it. And the coaches said, to trust the process. Get in the pool every day. Trust the process, and get in the pool. And you know, he had no idea when he was going to break or hit that record again. He had no clue. Trust the process. Get in a pool. Right. There was like, Brendan, how are you so consistent? You’re content. Well, plenty of it’s not that good. But I showed up and I made it that day for 15 years. Just the process, right? There are a lot of mornings like this morning, believe me, after that trip, I did not want to get up and do what I had to do this morning. Right. This is the same thing I do every morning, my morning routine, you know, reading, movement, planning, making my four posts every single day, and then come out, send the reminder emails, get the studio turned on, get ready. I know this is one of those mornings I was like, I’d rather I’m at home in two weeks. I love to go on long walks with my niece. I’ll do that tonight. But I was like trying to go through the motions. Brennan Just gets in there and then I found myself like right before we got on this thing, I was hyped to see you guys hyped 3 hours ago. I was like, Okay, make it fun, make it efficient. Let’s go. Brandon, trust the process. Get in the pool. My friends, if your sentiment is low, it’s because your process is random. See, when we sense progress, our sentiment goes up. When there’s no progress, we don’t. But see, we have to be okay with the fits and starts of that progress. And yet, I know so many of you already know all this stuff. I’m just making sure that you’re checking in because just like Phelps going to his Olympics, you’re going into your Olympics these next four months. For people in our industry, this is when we are three and four x everything like this is unreal. This is like the greatest time to be serving people and thought. Leadership is always this season. I just want to make sure you’re checking yourself. Okay. The third thing my friend was struggling with at first, he didn’t have a plan and his team did have a plan. No new plan. No one was on a rhythm. He wasn’t on a rhythm. He was just showing up and slaying dragons every day. Every day. Show up, and slay dragons. But no consistency in the day. No consistent blocks of time with himself for creativity. No consistent blocks of time for specific team members. No, just no consistency at all. They were just. Okay, let’s gather launch, and slay dragons. Launch, and slay dragons. Too much idle time in between. No plan, no process.

The fourth big idea today: so simple people, you’ve got to have the right people on the bus.

You’ve got to have the right support team.