Why is change so hard? Because to make progress you have to deal effectively with these three things:

Sometimes, the fear of uncertainty, judgement or struggle is overwhelming. But what’s more important for you to value? Your fear, or your heart saying it’s time for a change? Your fear, or your mind saying, “I deserve better.” Listen to your strength more often and you’ll experience what we call #TheChargedLife. 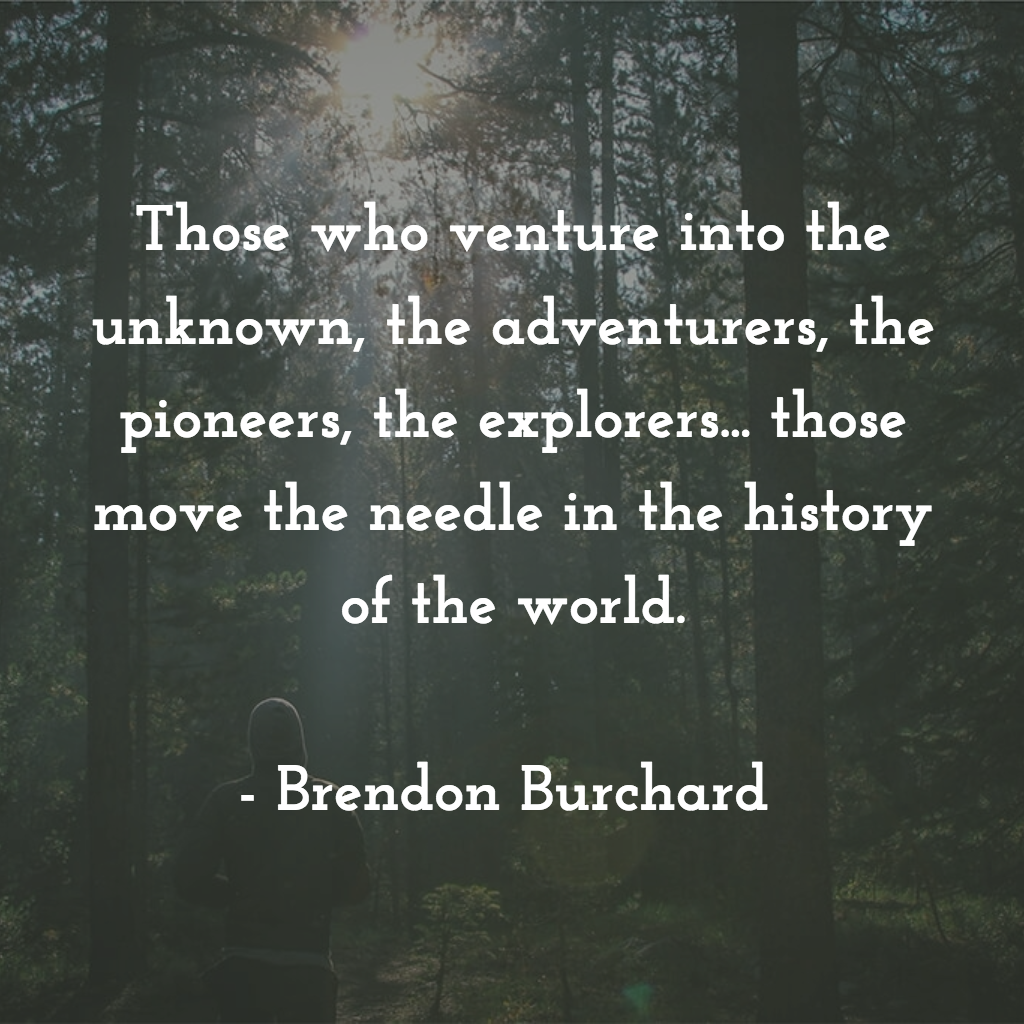 Hey my friend, it’s Brendon and in this episode, what I want to talk with you about is the price of change. We all go to change our lives and we all want to improve our lives whether you want to improve your health or your relationships, your work, your lifestyle, you know that sometimes it’s difficult and you back off of it. You back down from change because it’s scary.

Well the reason is because psychologically you were unwilling to face the price of change. It’s kind of like the way I think about it; it’s like admission gates. Like you know how you go into a museum, park or a circus or to Disneyland, you kind of have to pay to go through the turnstile to enter and enjoy the ride. Well, change is like that too.

Most people bounce up against those turnstiles and they go, “I don’t like it. It’s uncomfortable to me” and they leave the park and they never get to experience the beauty and the wonder and the fun on the other side. They say, “Ah, it’s not worth it” and they walk away from their goals and their dreams and their hopes because they just thought it wasn’t worth it or it was too hard.

Well, I think there is 3 costs to change. Anytime you want to change your life, you’re going to be faced with these 3 things. They are the price of admission to a better life and once you realize these are the price of change, you can consciously choose, “Is it worth it to me or not?” Because most people they’re not consciously choosing it. They just get scared and run. So instead, I want you to realize there is a cost to change. Are you up for it or not?

Here is the 3 costs to change:

That first price of admission to get to the other side of change is Uncertainty. When you go to change your life, you don’t know how it’s going to turn out.

You just start the new diet, is it going to work? Is it not? You don’t know.

And that terrifies people. Uncertainty is so scary because we might lose something we like. Well, what if I lose the job and it was okay or I lose the person; she was not so bad or I lose that opportunity and it’s scary to people.

And when you can get to that point, when you can say, “You know what? I’m cool with the fact I’m not going to know what the heck is going on because I haven’t done it before. I’m going to try even though I don’t know how it’s going to turn out.” If you can get over that, that’s that first sort of step into making longer term change for your life.

See, I’m okay with it. I never know how things are going to go. As many of you know, I shoot this whole YouTube show, this thing called The Charged Life (my podcast), I do it extemporaneously. I don’t know exactly how it’s going to go. I usually know the topic, I know maybe one or two points in my head and I just go.

So, have you not changed because your mind is saying, “I need everything to be perfect and scripted out. I need to know all the exact steps in the future.” If your mind is telling you that, I guarantee, you’re not progressing, growing or achieving at the rate that you could.

And that’s why I have been able to change my life so significantly and grow so quickly beyond sometimes my peers because I’m willing to venture into the unknown and they are not. And it is those who venture into the unknown who are the adventurers, the pioneers, the explorers, those who move the needle of change in the history of the world. So, allow yourself not to know and go.

The second big price to change that a lot of people avoid or run away from but is always going to be there is when you bumble into something like that, guess what?

The price to change is other people might not understand. Meaning judgment. Meaning rejection.

People might make fun of you when you go to change your life. They might say, “Who do you think you are? Why do you want that? Well, that’s dumb. Why are you doing that? You’re so stupid. Why can’t you just be happy?”

You’re going to get people saying that. There’s a social fear of change as well because they would rather have you conformed to their little conception of you. People draw a little conceptual cage around who you are and they say, “Well, this is who that person is.” They think they know you. They don’t know you.

And you know what, they also don’t know? They don’t know tomorrow and they don’t know where you want to go. They don’t know exactly what you are capable of because they’re trying to gage it based on their certainty coming from the past. But who you are is not tethered to the past.

You get to choose that every day. That’s a second chance every single day. That’s the beauty of the world. Tomorrow is always a blank slate. Tomorrow you get to begin anew. It takes guts and most people don’t have the guts because they’re scared of the rejection that could come. Your spouse makes fun of you. The people at work go, “What are you? Crazy? That’s stupid.” The kids at the play yard point and tease and ridicule and abuse and beat.

But you know at the end of the day, it’s your life and you’ve got to decide what it stands for.

Look, the reality is most people got your back and it’s not my opinion. It’s reality. All of us have seen them, “Oh there is all these judgement, all these people are out to get me.” Look, you need to stop believing people don’t support you and want you to achieve and grow.

I used to believe that. I thought, “Well, the people around me, they will support me until I get above them, right?” No one wants you to be above them. But you know it above, that’s a BS definition. That’s their meaning and definition, not yours. You’re just growing into your full potential. Don’t apologize for that. Don’t hold back from that just because somebody might not like it. That doesn’t make any sense whatsoever. Your job is to live that fullest expression of who you know you can be.

Look, in silence is suffering. If you’re not expressing who you are and what you want in life, that’s not personal freedom. That’s personal caging of your soul and you are doing that not anyone else. It’s easy to blame everyone else, “Well, they judge me so I stopped.”

At the beginning, they all are like, “Um, weird.” And then, as you get going, they’re clapping for you. So, don’t forget that and don’t also forget that guess what? The bigger you grow to, the more people will judge you. It’s not like, you get success one day and everybody loves you or you get millions of followers.

Look, I got millions of students out there who graduated. My videos, my online courses, who read my books and we still get people going, “Well Brendon, you’re an idiot.” Millions of students. “Well Brendon, you’re and idiot.” Or I do my videos and they go, “Well, this is stupid. You’re just, why don’t you just stop doing these videos. Your hair sucks. I hate your shirt.”

It’s like, I don’t care. I don’t. I’m not going to pause my mission simply because there are some mean people out there who are uninformed or in a bad mood. You must not stop your march out of a fear of rejection or judgment because it never goes away. What needs to come back into your life is the confidence you’re going to do it anyway. To go and that’s the price of change. The price of change is some people won’t like it but on the other side, that’s your dream. So, go.

The last big price, big cost of change, last huge one and most people don’t like it, is that guess what? To change, to progress, it’s going to bring struggle. Struggle, hardship, difficulty, that’s part of the process.

And they say it knowing that something is missing. You know what’s missing?

The push, the challenge, the struggle, the growth that comes from those things.

So, are you going to struggle? You bet your butt you’re going to.

Doing this dream for me, I have struggled with launching a book one time, didn’t do so good. Launching videos, nobody watched it. Doing my first seminar, 20 some people showed up, that was it.

Because I was okay with the struggle. In the process of struggle I never hated it. I said, “This is part of the journey.” I accepted that was the truth. I didn’t fight it. I didn’t bemoan it. I never complained. I was never bitter. I was like, this is just part of it. Even when I started, I went bankrupt when I first began; I didn’t know what I was doing.

Because you know what? Don’t ever forget when you knock on the door of opportunity that it’s work who answers. Don’t bemoan, complain or hate the struggle and the difficulty that it sometime takes for you to grow enough and to find that place in you that is allowing it to be spontaneous and flowing even in the midst of difficulty. To find your center in the midst of that chaos because you know that it is okay that it is chaotic.

But we don’t have to feel that way and that’s a struggle to master your internal world and master our day each day and push away distractions and say no to the wrong things. That’s hard, it’s difficult and thank God it is because that’s what makes you grow.

I hope that you have enjoyed this episode. If you did, do me a favor, like it, share it, tell to other people about it. I’d love them to enjoy The Charged Life along with you and remember this: It’s always difficult to change. There will always be people who judge you and you will never know the exact path and exactly how it’s going to turn out. Begin anyway.

You know what’s on the other side of the price of change?