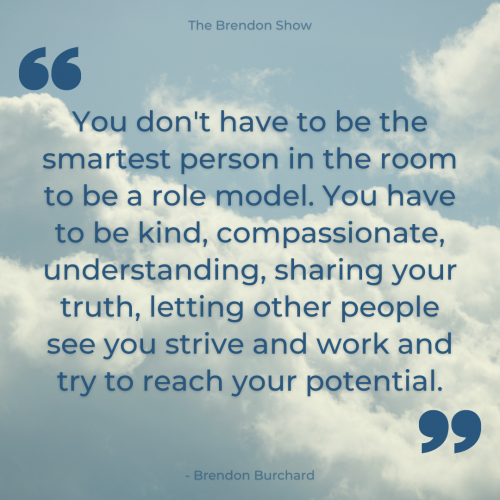 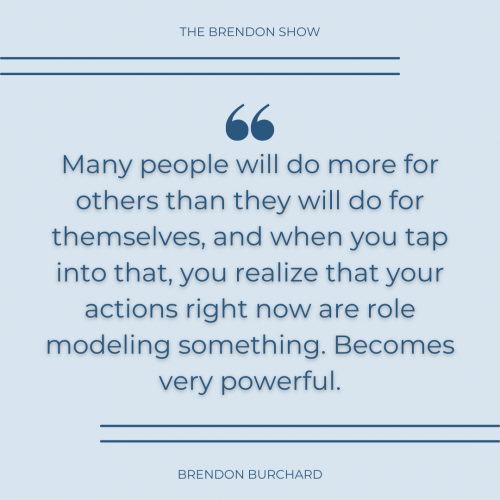 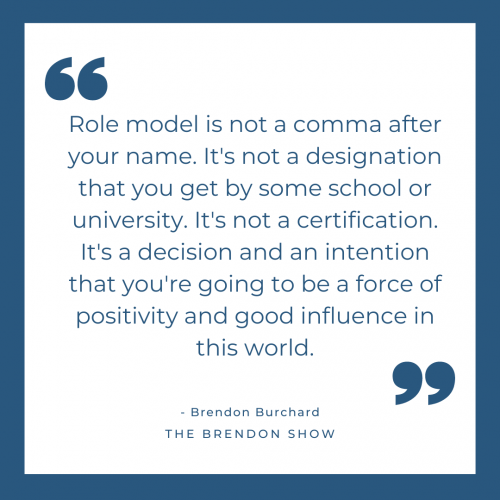 [The following is the full transcript of this episode of The Brendon Show. Please note that this episode, like all TBS episodes, features Brendon speaking extemporaneously–he is unscripted and unedited. Filmed in one take, The Brendon Show has become one of the most viewed unscripted, direct-to-camera self-help series in the history of YouTube. It has also been the #1 Podcast in all of iTunes and is regularly in the top podcasts in the Self-Help and Health categories around the globe. Subscribe to the free motivational podcast on iTunes or Stitcher.)

1. Remember People Are Looking Up to You

The role model mindset says: I know people are watching how I deal with this, so I’m not going to just do it, you know? Like, I’m aware that I’m a person of influence with others, even if that means they’re my peers or my friends, I was aware that our behaviors and energy impact other people, and I took responsibility for that. And that was a game-changing moment. And like some of you who went during the pandemic, if you were in my audience at that time, and I mean my community, our global audience, social media, whatever, if you go back and you watch my – I did a whole series for our coaching clients at the time in the first months of the pandemic and some of those you can go back and look on YouTube as well. I think we released a few of them for free and it was about how to deal with crises. The central teaching back then was: hey, be a role model through this time of uncertainty. Your kids are watching how you deal with this pandemic. Your kids are watching how you’re dealing with this uncertainty. And if you don’t have children, your friends are, your spouse is, someone is observing how you’re dealing with the difficulties of life and you have a chance to inspire them.

2. Choose to Be a Positive Force

And soon as you realize that opportunity with – when you’re with other people, you have an opportunity to inspire them. To me, that is the role model mindset. I’m going to take it upon myself to be a role model in other people’s lives, not because they gave me permission to do it, not because they expect it, not because I’m an expert, not because I have an ego, but because I’ve read enough books that say, you know what? Somebody changed my life. All those self-help books, it’s always the same thing. All the great biographies. You cannot read a great biography without a person saying, this person inspired me to be better. And that person is never, you know, necessarily the person they sought out.

And so for me, I wasn’t – I never thought – you don’t have to be the smartest person in the room to be a role model. You have to be kind, compassionate, understanding, share your truth, let other people see you strive and work and try to reach your potential.

3. Don’t Let Your Concerns Control You

Soon as you step into the role model mindset, you free yourself from so many nonsensical concerns.

So, it’s not about being fake. It’s not about faking it til you make it. It’s about recognizing that your energy impacts other people, you know?

4. Take Responsibility For Your Energy

Another throwback to Oprah, she said one of the defining shows she ever had was when a woman was on her show sharing the story of when she had walked back at this – I think it was a newsroom. And in the back there was a sign that said, please be responsible for the energy you bring into this space.

Please be responsible for the energy you bring into this space.

That’s – that social awareness that is the role model like, oh, you know what? I don’t want to be a grumpy jerk. I need to get a hold of my own emotions because I realize that I influence other people. And once we can do that, we see outside of ourselves. Now, you get to think big picture, too.

Because many people will do more for others than they will do for themselves, and when you tap into that, you realize that your actions right now are role modeling something. Becomes very powerful.