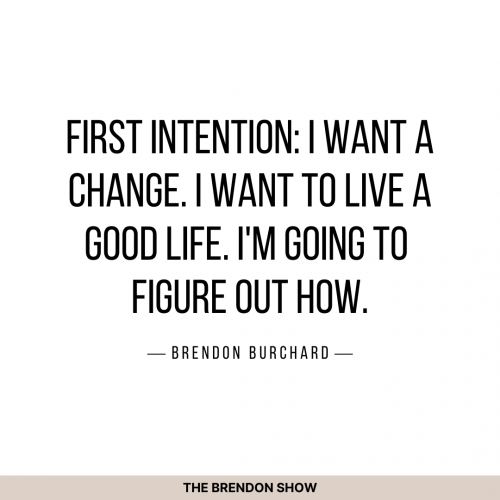 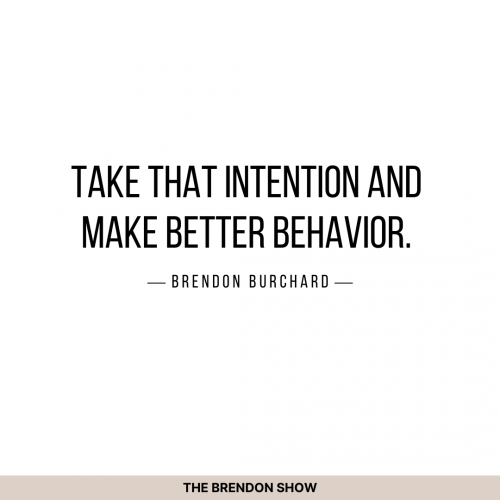 [The following is the full transcript of this episode of The Brendon Show. Please note that this episode, like all TBS episodes, features Brendon speaking extemporaneously–he is unscripted and unedited. Filmed in one take, The Brendon Show has become one of the most viewed unscripted, direct-to-camera self-help series in the history of YouTube. It has also been the #1 Podcast in all of iTunes and is regularly in the top podcasts in the Self-Help and Health categories around the globe. Subscribe to the free motivational podcast on iTunes or Stitcher.)

First intention: I want a change. I want to live a good life. I’m going to figure out how. I didn’t know how. I was a sad, very desperate, and very hurt, young man, and that’s what turned me to personal development, to self-improvement, to self-help, later to psychology, later to philosophy, later in neuroscience, later to high performance studies. That was my arc. I just said, “I’ve got to figure this out for myself. I got to figure this out for myself.” And then later, I was able to transform in every area of my life because of the simple model: beginning with the conscious choice, the decision, the intention. I’ll give an example. I know this – I don’t be too philosophical about it. Philosophical? Philosophical? Philosophical. Sounds good. OK. I wanted to make sure … OK, I got it. I got to figure this out. I’ll give you a great example. I get asked this every time I do this about communication. This – was not natural for me at the beginning. The first time I turned on a video camera was a painful day I still remember. Because you ever try, anyone has ever done a video where the first time you turn it on, you’re so awkward and awful? It’s just terrible. It’s like, you think, how could I be any worse? Because I bought a flip video camera, some of you might remember how old this, a little flip video camera, I duct-taped it to a box. I pressed record. I went there and sat was like, “Hi, I’m Brendon Burchard! Uhh, doesn’t sound right. Hi, I’m Brendon Burchard. No, no. Hi, I’m Brendon Burchard”. I couldn’t. I was like, you like, you’re doing the video, you can’t even introduce yourself. You do like 30 takes to introduce yourself and you’re like, this is awful! I was awkward in front of people. I wanted to speak at that stage of my life, but I was very, very, very embarrassed and shy to talk to people, even though outwardly people thought I was a happy-go-lucky kid. Internally, I was super insecure. And I want to be a leader, though. And I wanted to communicate and especially after my car accident, I got very clear: if I’m going to matter, if I’m going to make a difference in what I feel is the impulse or the direction or the calling of my life, I need to learn how to talk. I know that sounds so simple, but I know, I know we have some introverts out there who understand what I’m saying, it’s like we have to learn how to talk and express ourselves and because we have the internal stuff going on, but I didn’t know how to take it out of here and put it out there.

You know, we’re, we’re 37 minutes in and I haven’t looked at a note yet because I’ve been able over the years to have that intention. And I took that intention and then I made better behavior. I said to myself, “OK. Every opportunity I have to speak, I will take”. I remember I was in school back then, so I just say, “Oh, we get to share our report? OK. My behavior is going to be, I’m going to, I’m going to try to give the best speech I can in class”. And I made a complete, ya know, fool of myself in front of my classmates trying to talk, but I was trusting in the process and I just thought, that’s for this part of it. And that behavior became a habit. I always raise my hand to speak up. I just started making a habit. I’ll raise my hand to speak up and if there’s a chance to speak, I’ll take it. Then, became a practice. Oh okay, I started shooting videos and I forced myself to shoot a video almost every day and then I’d watch it and I’m like, ooh, ooh, agh, it’s still hard. Don’t worry. It’s still hard watching a video of myself, ugh, just like ahh, especially me. Ya know, have you ever tried to get a thumbnail of me? It’s impossible. Like, you know, like 14, but it became a practice every day. Just teaching, talking, sharing. And now today I can do nine hours on stage straight through. I can share 15 to 20 different models for human behavior, change for motivation, confidence, great relationships, for productivity. I can go hours and hours, three, four, five days with almost no notes because it’s second nature now.

That intention to become a good communicator, the raising of a hand, the trying every time, the repetition, but not just doing it a lot, looking at it and asking: How can I perfect that? Getting feedback from others: How could I have done better? What else could I have tried there? That’s what a practice is. A practice requires feedback, doesn’t it? You could do yoga in your house, but if you go to class with an expert teacher and they adjust you, that’s more perfecting practice. What we call deliberate practice. You’re getting the feedback that’s making you better. So, trust me, millions of people give me feedback and I’m sorry, after millions of people giving me feedback, this is good as it gets. Sorry. I’m still working on it. But now it’s just who I am! I’m this annoying all the time. It’s just you learn to be yourself and to do your thing. This is my thing. But notice the game began with intention. I want to be a better communicator.

So, what’s your intention this year for what skill sets you to need to develop? That’s really related to that mission and that career part of … most people are just going through the motions in their careers, in their industries and their professions. They show up. They do the work. It doesn’t mean they’re not hardworking, but they don’t have a deliberate practice of getting better and better and better, meaning they’re not getting step changes of improvement over a period of time, and that’s why they get stuck. As an example, this time of year, so many people are gonna go to the gym and they’re going to go to the gym, they’re going to have, listen, they’re going to have the intention: get healthy. They’re going to have the behavior: go to the gym. They’re going to go to the gym every Monday and Thursday, so they’ve got a habit. But they don’t develop a practice of actually getting better in the gym, better with their form, better with measuring what they’re doing, understanding their sets, tracking their weights, and actually improving. That’s where you see a person at the beginning of the year, you know, for three months, they go to the gym. And you know what, that’s a great intention, great behavior, and great to have it, but because there’s no deliberate practice in improvement, what happens? Well, one person who goes to the gym for three months versus another person with deliberate practice. The person at the end of the three months, everyone goes, “must be her genetics”, you know, and you start telling yourself this story about why people are getting ahead better and faster and differently than you, that they’re blessed in some crazy way, when usually, nine out of ten times they had a more deliberate practice. They were getting feedback and they were adjusting ever so slightly along the way, they were perfecting that practice. And so every day was a compounding effect of perfecting that practice, where a period of time is like, whoa, in three months, they’ve got some abs showing, and in three months, you’re still forcing yourself to get to the gym. That is the difference between this model. And it doesn’t mean, notice, there’s no judgment in it. Notice, I’m not talking about personalities. What we’re talking about are intentions, behaviors, habits, and practices. That’s what we’re talking about.